The richness of this story will take hold of you and never let go.” - Roxane Gay

Traveling from the ashrams of India to the underground rock scene of New York City, Blue-Skinned Gods explores ethnic, gender, and sexual identities, and examines the need for belief in a fractured world.

In Tamil Nadu, India, a boy is born with blue skin. His father sets up an ashram, and the family makes a living off of the pilgrims who seek the child's blessings and miracles, believing young Kalki to be the tenth incarnation of the Hindu god Vishnu.

Kalki is confronted with three trials in his tenth year—tests of his power that will prove his divine status and, his father tells him, spread his fame worldwide. Over the next decade, as the story of his family unravels, his relationship to everyone—his dominating father, his beloved cousin, his cancer-stricken aunt, and the young woman he imagines he will marry—threatens to fall apart. At once a personal tale of youthful searching, and a magisterial, continent spanning tour-de-force, Blue-Skinned Gods is unwaveringly honest and heartbreaking, a powerful novel told through the eyes of a wonderfully winning and idiosyncratic protagonist.

Find it on Goodreads

Poem publication - "Gods in the Surf" at Burrow Press

Interview on the Poetry Vlog [video and podcast]

Guest on Minorities in Publishing Podcast

Review of Marriage of a Thousand Lies by Gertrude Press

"Drunk on Ink" interview with Jaggery 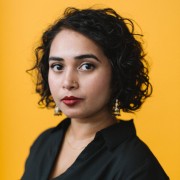 SJ Sindu is a Tamil diaspora author of two novels. Her first novel, Marriage of a Thousand Lies, won the Publishing Triangle Edmund White Award and was a Stonewall Honor Book and a finalist for a Lambda Literary Award. Sindu's second novel, Blue-Skinned Gods, will be published in November 2021. She is also the author of two hybrid chapbooks: I Once Met You But You Were Dead, which won the Turnbuckle Chapbook Contest and was published by Split/Lip Press; and Dominant Genes, which won the Black River Chapbook Competition and will be published by Black Lawrence Press in 2022. A 2013 Lambda Literary Fellow, Sindu holds an MA in English from the University of Nebraska-Lincoln and a PhD in English and Creative Writing from Florida State University. Sindu teaches at the University of Toronto Scarborough.